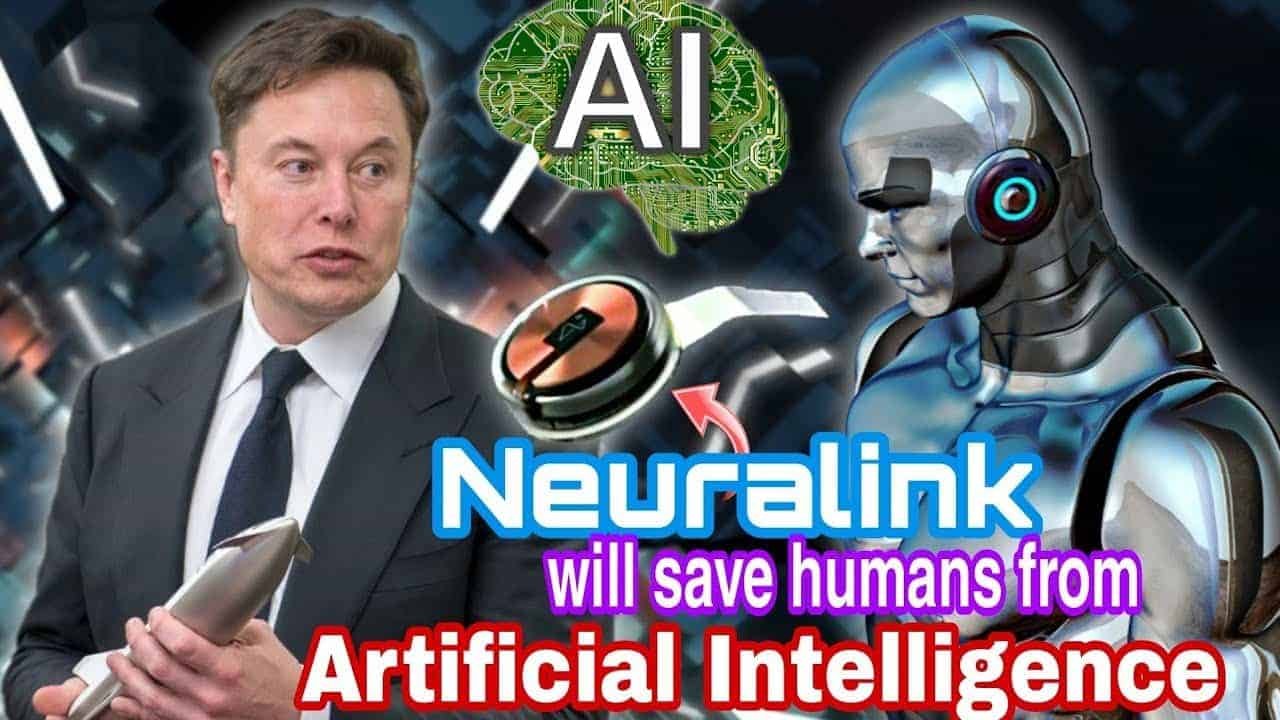 Elon Musk says Neuralink will protect humans from AI: Elon Musk is constantly working on solving many of the biggest problems of the 21st century. Like climate change and space exploration. But one problem he often talks about and according to him which is the biggest threat humanity is going to face in the future is Artificial Intelligence.

He even claims that Artificial intelligence is more dangerous than nuclear weapons. So how is Elon musk planning to save humanity from the threat of Artificial Intelligence?

In the interview with Jonathan Nolan, when asked the same question, Elon musk said “Neuralink is trying to help in that regard by creating a high bandwidth interface between AI and your human brain.”

Here he’s clearly indicating Neuralink as a solution to the AI problem. And if you watch interviews of Elon musk you may have noticed that whenever he is asked about AI, suddenly he starts talking about Neuralink.

“Like I said I think we’re gonna have to figure out this Nuralink situation. Otherwise, we will be left behind. We don’t have much time to Solve the Nuralink.”

But what does he actually mean by that? How is Neuralink going to save us from being invaded by AI? Well here is my personal explanation.

How Neuralink Will Save Us

AI or Artificial Intelligence is an attempt to simulate intelligence using Computers. And our brain is also like a computer. Compared to computers of the current generation our brain is a very powerful computer.

It can solve many problems that even the most powerful computers can’t. But there is a problem with the brain-computer. Imagine you want to teach a computer how to calculate. You just make a calculator program and run that on the computer.

Once you make a program you can copy the program on as many computers as you want. And boom all the computers now know how to calculate. But if you want to teach average humans how to calculate who don’t already know that.

You have to teach everyone separately for weeks, months or years even then an average human will not be able to calculate as fast as a computer.

Now imagine in the future, when computers will be much more powerful and the AI technology will be so advanced that Artificial Intelligence will be able to think and write codes for itself. In one word AI will be “Unstoppable”.

Intelligence is like a weapon that humans have used for millions of years to dominate over all other animals living on earth. Now when AI will have intelligence higher than us.

What if AI has more intelligence than humans

There is a big possibility that AI will do the same thing to us what we’ve done to other animals. We must be prepared to fight this situation. Elon musk indicated Neuralink as the solution. But how?

Well … to be honest, the only way to fight a higher form of intelligence like advanced AI is to have intelligence as high as AI. But how to become more intelligent?

You can wait for Evolution to make you smarter which takes a million years to make a significant difference Or you can use Neuralink. In the same interview, I mentioned before Elon musk also said “Computers are already like a digital extension of you” Remember the calculator problem?

Although we can not calculate as fast as a computer, we can use them to solve even more difficult problems. In this case, the computer is actually like a digital extension of your brain. AI is also something made by humans to work for humans.

And if you can use a powerful computer as an AI extension of your brain, that can literally make you as intelligent as AI. But there is also a big problem. To sufficiently use advanced AI as an extension of you, you will need a high-speed connection between your computer and your brain.

But It’s not possible by using only 10 fingers. And currently, you only have these ten fingers to connect your brain with computers. But what if our brain had something like a USB port in our skull that could create a very high bandwidth interface between our brain and the computer.

You could just think about a very difficult problem and the computer could solve that and send the answer to your brain in less than a second. Now, no matter how intelligent AI gets il, that wouldn’t make any problem for you.

These ultrathin wires go inside the brain, collect signals and send them to a chip located in the skull which replaces a small part of the skull. It is capable of making a high bandwidth connection between the brain and a computer. or not yet.

The technology is still in its earliest forms. The current version can help you operate computers directly with your brain by just thinking and is expected to cure many brain diseases. It is obviously a great achievement. But still, it’s not complete.

And hopefully when it will be solved, maybe it will look and work totally different than the current version, maybe it will use more advanced biotechnology. But once It’s complete it will be able to create a High bandwidth interface between the brain and Computers.

Advanced AI as an Extension for Brain

Using an advanced AI as an extension of your brain will make you as intelligent as the AI. And then humans will not have any limits. Learning very difficult things will be a matter of seconds. We won’t need to spend years in schools and Universities.

Neuralink will download all the information directly in our brains. You never know, with this kind of groundbreaking technology, anything is possible. In conclusion, we can say that the only way to prevent an AI invasion is to merge with AI itself.

Thanks for reading till the end. Comment what’s your opinion about this information “Elon Musk says Neuralink will protect humans from AI”.