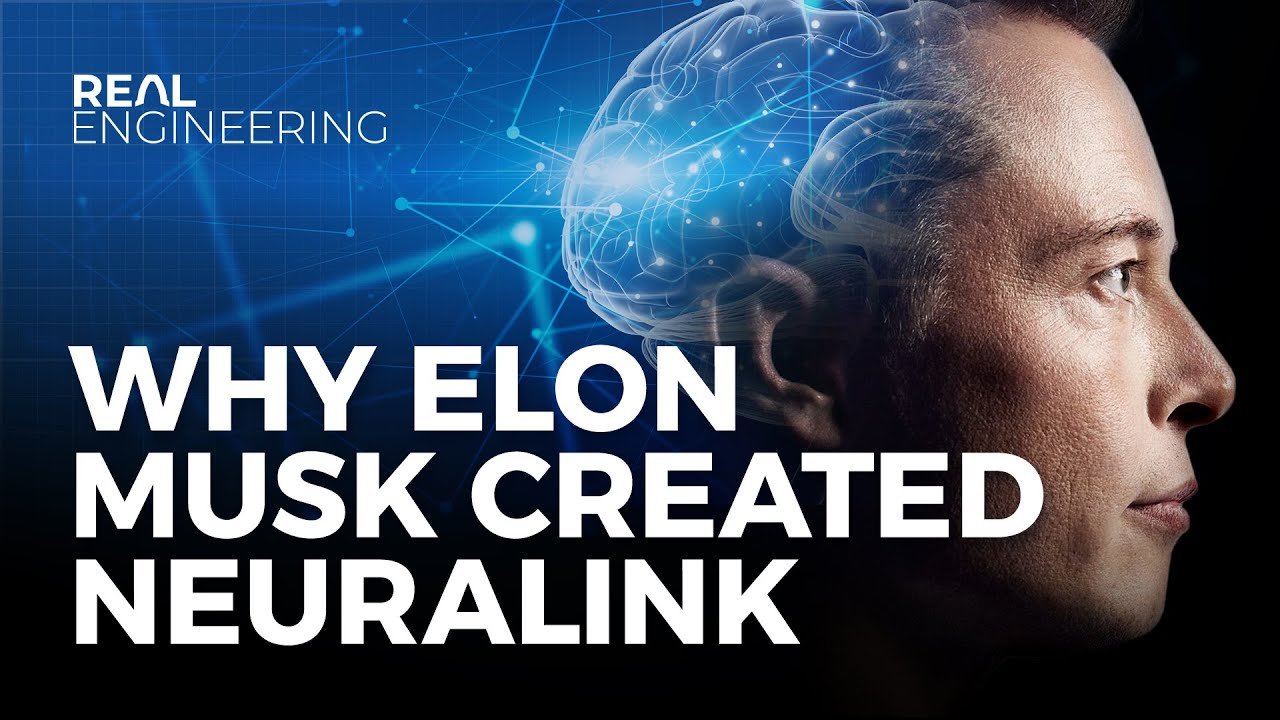 Why Elon Musk Created Neuralink?: Over the past decade, Elon Musk has become one of the most famous figures on the planet. Revolutionizing the banking, automotive, rocket, and energy industries in a relatively short period of time.

His reputation for disrupting established industries has elevated his status to some kind of technological Jesus for many, and with his latest venture, Neuralink, Musk seeks to take that status quo to the next level.

Neuralink, to me, is Musk’s most lucrative venture to date. With the goal of developing technologies to unravel the mysteries of our most important organ, the Brain.

But the brain remains a mystery in many ways, leaving no substitute for intervention when it malfunctions. We have only scratched the surface of how this organ operates, and to me, it is one of the last great frontiers of science.

If you only pay attention to the headlines of mainstream science publications, this technology will seem like Musk is trying to create cyber humans. Where healthy people will voluntarily receive biomedical implants to enhance their brain function, but that’s just Musk using his techno-Jesus status to generate hype for his latest business venture.

In fact, NeuraLink is much more than something worthwhile, but perhaps less exciting to the average person. The technology could help accelerate brain power, and help people with severe brain defects and injuries live happier and longer lives.

What Neuralink Can Do

There are many types of receptors in our body to gather information about the world around us. Take the hair cells in your inner ear. They are activated when vibrated by sound and the cochlea, the snail-shaped organ in your inner ear, is shaped to allow different parts of it to be activated by different frequencies, along with the basilar membrane.

This means that the base of the cochlea, closest to the oval window attached to the outer ear, is sensitive to high frequencies up to 20,000 Hz.

And as we descend deeper into the snail-shaped sensory organ, the lower frequencies begin to vibrate the hair cells until we reach the apex of the cochlea where frequencies as low as 20 Hz can be detected.

When activated, these hair cells send electrical impulses through the auditory nerve to your brain for interpretation. The exact process of interpretation is extremely complex and beyond human knowledge, as it involves thousands of neurons that gradually fade out as they travel to their final destination.

But thanks to our understanding of the signal input phase, we can actually bypass the ear as a sensory organ altogether and artificially stimulate the nervous system to allow the deaf to hear.

Children who have never heard their mother’s voice are suddenly able to hear for the first time. His smile will make anyone see the value of this technique.

How does this Neuralink work?

The device consists of a microphone and a sound processor, which in turn generates an electrical signal to send to an electrode array that is actually inserted directly into the cochlea where it can directly stimulate the nerves of the inner ear with electrical impulses.

It bypasses both the hair cells of the inner ear and the sound-transmitting structures of the outer ear, and so it can help people who have defects in these parts of the ear.

A surprising technology, but it doesn’t require any implantation of medical devices in the brain, as NeuraLink plans to do. It simply activates the nervous system in its input phase.

Creating a technology that can directly activate the auditory cortex to allow us to hear is a whole lot of ball games. Current technology is overly aggressive on this side of things.

Take Braingate. This implantable device contains about 256 electrodes that can read and stimulate nerve activity. This is precisely what Neuralink is working to improve upon.

The medical implant was placed on the surface of a human’s brain in the motor cortex, where it records the activity of neurons in that area.

The data from those records were then used to influence a mouse cursor, which allowed him to type and use a computer without any movement of his limbs. Researchers took it a step further and began using neural records to allow another human to control the movement of the robotic arm.

This is the exact technology that Neuralink wants to improve, and there’s a lot to be improved. The first issue with the Utah Array is the physical properties of the electrodes.

These electrodes are like hard and sharp needles, which allow them to penetrate the brain and record internal activity, but this causes problems with the body’s immune response.

This is the first part of Neuralinks that plans to improve this technology by making these electrodes much smaller. The electrodes of the Utah Array vary from about 0.03 millimeters at their ends to about 0.1 at their bases.

Neuralink threads are very small, about 0.004 to 0.006 millimeters. By making the threads thinner they may affect a smaller part of the brain, making them less likely to affect nerve function or puncture blood vessels, but perhaps more severely making the threads more resilient.

Allowing them to move with the brain as it moves across the skull. This is really a big problem. The tissue in the brain is very soft and elastic. If you have hard needles like electrodes, the brain will simply deform around them.

This causes scar tissue to build up around the needle that over time will block the needles’ ability to read brain activity through the scar tissue, keeping the electrodes from matching the physical properties of the electrodes to the brain as closely as possible.

This will allow the brain to move and deform, thus reducing the formation of scar tissue and extending the life of the electrodes. An important design parameter from medical implants.

Neuralink has therefore moved away from these rigid silicon electrodes and created thin flexible gold electrodes coated in a conductive biocompatible thin-film polymer.

But such electrodes come with their own issues. Their small size and flexibility make them too difficult for a surgeon’s skilled hand to insert, so Neuralink has also developed a robotic electrode inserter to help.

The robot comes with a suite of cameras and light modules so that the robot can insert threads accurately. The robot uses a needle to advance the electrode thread to the desired depth in the brain before retracting and releasing the thread.

On average, this robot can thread the electrodes in one minute, even when the surgeon makes manual adjustments to avoid blood vessels.

Neuralink‘s white paper placed special emphasis on this potential because breaking down the blood-brain barrier is suspected to be a major driver in the brain’s inflammatory response, which can then worsen and impair electrode function.

It is important to note that Neuralink is not the first company to manufacture thin-film polymer electrodes, but their work with this robot and in streamlining the manufacturing process for mass production has helped Neuralink create a viable medical device for sale. They have also significantly increased the number of channels.

The Utah Array electrode array can reach a maximum channel count of 256 channels. Whereas this prototype system, which Neuralink has surgically implanted in rats and successfully recorded, has 96 electrode threads for a total of 3072 channels, each containing 32 electrodes.

This is a very important design parameter because more data equals more control. This journal paper titled “Learning to Control the Brain-Machine Interface for Reaching and Catching by Primates” details an experiment where researchers implanted a brain-machine interface in the brains of Macaque monkeys.

They trained the monkeys to complete a task on a screen using a small handheld controller. They recorded the monkeys’ motor cortex nerve activity during this training and mapped a robotic arm to match their arm movements.

They confirmed that the more neurons they could record, the more likely the robotic arm was to match the monkeys’ actual arm motion. So if we can record from more channels, we can expect to achieve higher accuracy, and later as technology advances, we can do more complex tasks.

Perhaps instead of controlling a cursor or robotic arm, we could fit an exoskeleton to allow paralyzed patients to walk. However, we have one last and most important technology challenge that can be considered. We need to get this data out of mind somehow.

The electrodes record analog data from the brain, which first needs to be amplified because the nerve signals are generated with very low voltages as low as 10 microvolts, then the noise needs to be filtered out and finally, the analog signal is converted to binary data.

This reduction in simple bits is important because we need to somehow transfer this data to the computer outside the head. Installing a processing board inside the brain is not an option. Looking at the Utah array we can see that there is much left to be desired.

The electrodes themselves require a connector that bears an uncanny resemblance to the head-jack from the Matrix. When the researchers wanted to use brain-machine interfaces, they had to plug these large neuroport blocks into connectors that feed data to a giant amplifier and signal processing.

Neuralink is trying to fit the amplification and data filtering stage inside the onboard processor. This is the prototype board that he fitted the mouse into.

Here the electrode threads are fed into 12 custom-built microchips, each capable of processing 256 channels of data, which is equivalent to 3072 channels coming from the threads.

However, this prototype system only used a single USB C port for both power and data transfer. Which would again require an ugly port that breaks the skin. It’s not just a cosmetic issue.

This is a huge open wound in the body’s first line of defense for infection and it leads directly to the most valuable part of the body. It is simply not a substitute for a commercial product.

So NeuraLinks‘ next technical challenge is to develop a method for both power and data transfer to these implantable devices. Elon made some off-hand comments about this during his presentation: “And the interface of the chip is wireless, so there are no wires coming out of your head. Very, very important.“

So you it’s basically your phone’s Bluetooth. We’ll have to look for an app store update for this, to make sure we don’t have a driver issue. Updating Uhm…..” Nice Elon. OK, so there’s potentially a driver problem beyond people joking about brain implants.

This comment, in typical Elon fashion, is a bit misleading. Bluetooth doesn’t really have the bandwidth required to transfer that much data, so an alternative method would be needed to transfer it from the device to the outside of the skin.

The Neuralink whitepaper here doesn’t shed much light on this specific part of their plans, but they do summarize in their presentation that their first planned product includes four of their N1 chips.

This device will probably do some further data processing where it will allow the user to control the cursor on the phone or computer before the simplified data is transferred to the phone via Bluetooth.

Neuralink has an ambitious goal of starting human trials this year to begin the long and arduous task of getting FDA approval. If they succeed in getting Food and Drug Association approval for a commercial product, it would be a huge leap forward in the treatment of injuries resulting from paralysis.

Potentially changing the lives of hundreds of thousands of people living with paralysis, allowing them to complete simple tasks such as controlling their computers without the help of a carer.

While I don’t see healthy people using these types of devices, implanting any device in the body no matter the brain will always be a huge risk. It is certainly a plausible scenario that future humans may elect to implant such a device.

So these are enough for today. Comment what’s your opinion about this information “Why Elon Musk Created Neuralink?”.