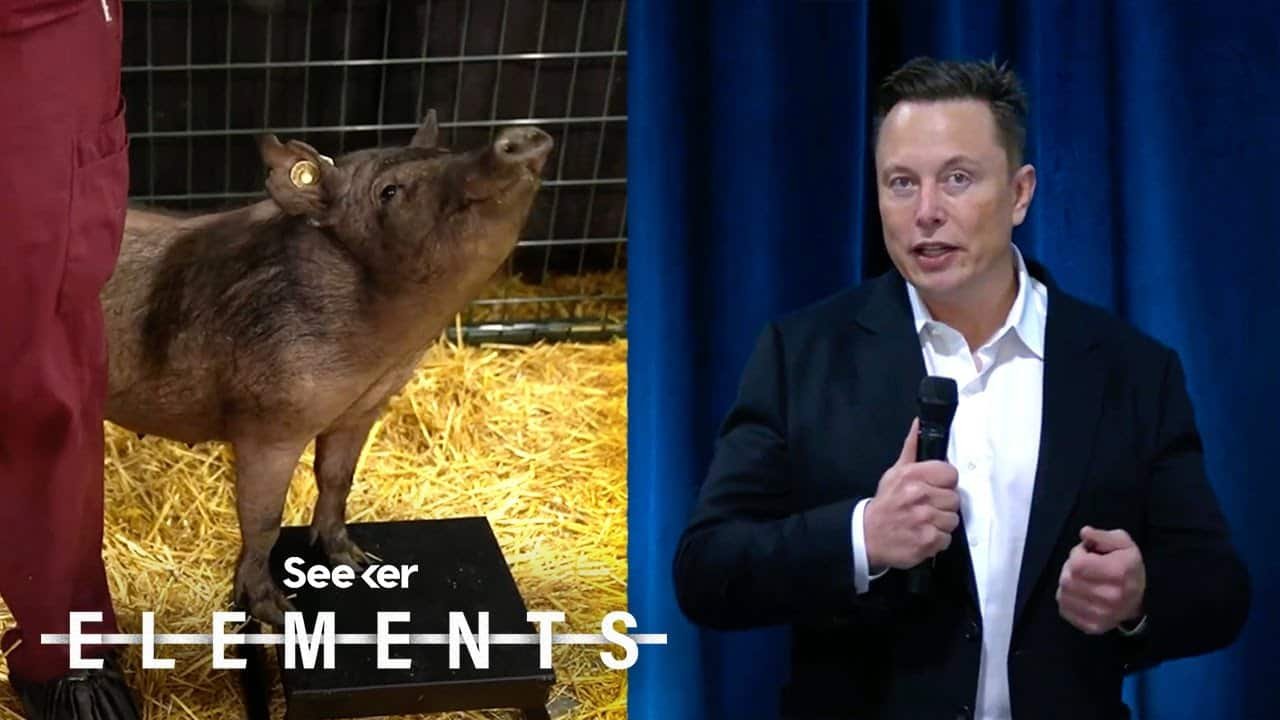 Elon Musk Showed Off How Neuralink’s Implant Works In A Pig: On August 28, 2020, Elon Musk hosted a Livestream with an update on his company Neuralink’s progress on building a Brain-Machine Interface.

So what has changed in the time since we were first introduced to Neuralink, and where is the company itself going from here? A brain-machine interface or BMI is just what it sounds like, a machine that can interface with a human brain.

BMI has potential uses for helping the disabled to move robotic limbs or even helping the able-bodied use computers and devices in new and faster ways. There are a few approaches to creating BMIs, and NeuraLink uses electrodes on wires only a few micrometers thick that are threaded between neurons to read their activity.

Neuralink’s latest BMI still hinges on those threads, but otherwise, it looks fundamentally different from the way it first appeared. The mice that sported earlier iterations had a USB-C port sticking out of their heads that sent information collected by electrodes to external devices.

Ultimately, the goal was to have the fully implanted chips communicate wirelessly with an external device that sits behind the ear. The latest device is much more simplified. Dubbed the Link V0.9, it measures 23mm x 8mm, about the size of a chunky coin.

Instead of living entirely in the skull, Link V0.9 actually replaces a piece of it. Once a hole is drilled and electrodes are threaded into the brain, the disc-shaped BMI gap is filled in and the skin is super-glued over it. No, I mean it’s super glued on it, not kidding. Anyway, when it’s all said and done, the only evidence that a person is now a cyborg is a tiny scar that can be hidden by hair.

Each link contains 1024 channels for monitoring neural activity and compresses and sends data at a rate of megabits per second to a device such as a phone. A person can also have multiple links depending on their needs and if they are okay with a skull that looks like Swiss cheese.

Although the Neuralink Researchers aren’t too concerned about replacing the skull fragments with their own tools. They say that since the properties of bone are well understood, it is not difficult to design something that can withstand any conditions a normal skull sees.

Working to demonstrate their latest prototype was strong enough to handle a rough and tough lifestyle, Neuralink introduced a pig named Gertrude. Gertrude installed a Link V0.9, and her device monitored the neurons that represented her snout.

Whenever Gertrude smelled food or a handler touched her snout, a screen showed activity in her brain while making short beeps and boops. Neuralink began testing with pigs because of the skull thickness and membrane makeup similar to that of humans.

But there were some unexpected benefits, like the fact that they constantly bump into things which Musk said was a good demonstration of the integrity of the device. And pigs can be trained to walk on a treadmill. This allows researchers to read neurons dealing with moving joints.

Based on the readings, they could accurately predict where the joints would move. This kind of technology could be huge for paraplegic and tetraplegic people.

Musk reasoned that because the connection between the brain and limbs of people who were paralyzed by a spinal injury is effectively broken, his device allows people to walk again by decoding the impulses of movement and transmitting them to the other side of the brake.

While miraculously making people walk again is an incredible goal, Neuralink‘s goal goes far beyond that. The device can also send impulses to neurons, so some workers imagine it is treating whole-brain disorders.

Musk, sometimes futuristic, photos could be used to store memories, download them to robots, or communicate at high speed with AI. Those are very high ambitions and there are too many obstacles to clear between the here and the future Musk pictures.

The Neuralink device needs to be tested in humans, although the FDA has given the Neuralink breakthrough device designation, moving them closer to human trials.

The machine that weaves threads into the brain looks sleeker and more medical than it did last year, but it’s still limited to implanting electrodes in the cortex and can’t go deep yet. And then there’s an obstacle that is our own understanding of how the human brain works.

We need to learn more about the language of neurons to decode their spikes and techno-beeps into something meaningful and we are far from that.

Ironically, the Neuralink Researchers suggest their device, which can actually be inside the brain and monitor activity, may be the only thing that takes our understanding of the human brain to new heights. While some expect more from this presentation, it is still progress.

Based on what Neuralink has achieved, with about 100 employees, it will be interesting to see where the technology is now another year as the company grows. The Link V0.9 uses a battery that Musk claims will last all day and can be charged wirelessly throughout the night.

I’m not exactly sure how wireless charging would work on something embedded in your skull, but I love the picture that Neuralink will also develop some kind of pillow, which will bring new meaning to the term “Power Nap.”

Thanks for reading till the end. Comment what’s your opinion about this information “Elon Musk Showed Off How Neuralink’s Implant Works In A Pig”.