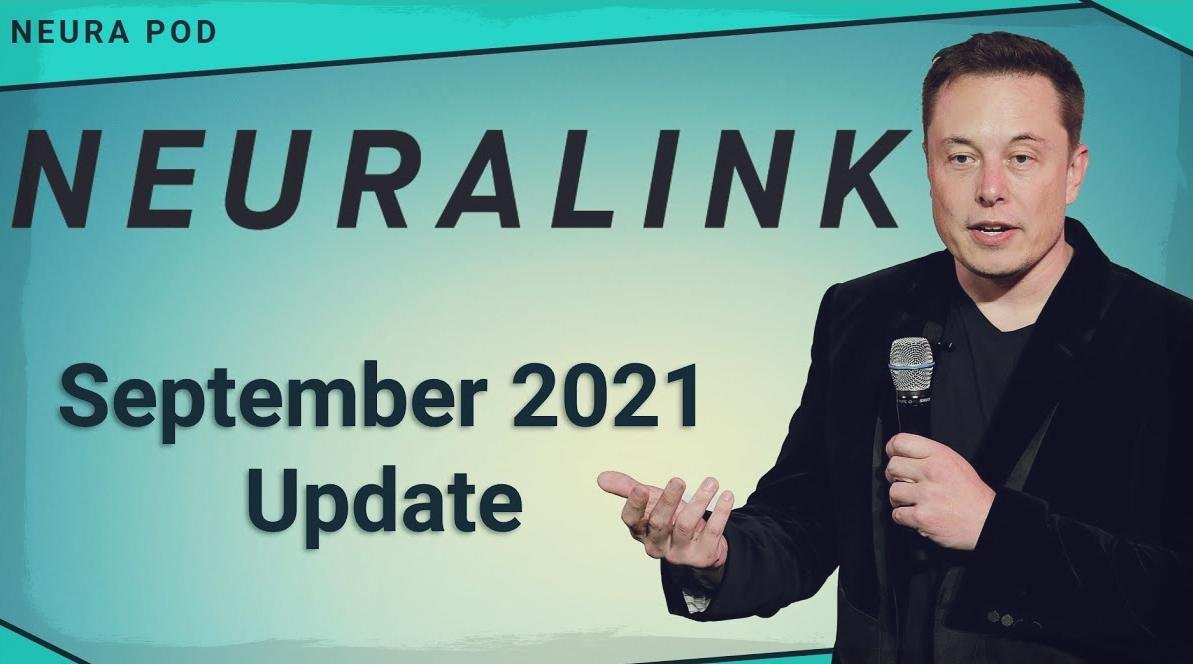 Elon Musk’s Neuralink Update – September 2021: Hi guys, How are you all? Today we are going to discuss the September Update of Elon Musk Company Neuralink. First, we’ll discuss a post where one of the original founders and former president of Neuralink Max Hodak unfortunately says that Multiple Sclerosis or MS is not a good fit for an electrical implant.

Then Elon responded to a tweet indicating how Neuralink fits into the larger consumer tech revolution currently underway. We’ll also be going to discuss some brain-computer interface progress made by Facebook followed by an update on what Max Hodak is working on since he and Neuralink parted ways in April.

Then we’ll finish on a lighter subject because spacex is not the only elon company with a cool place to grab drinks. Elon showed a sneak peek of Neuralink’s cyberpunk-inspired bar.

Max responds by saying “MS happens when your immune system starts attacking cells that produce electrical insulation around neurons. Not a good fit for an electrical implant. Need to address at the immune system or by somehow making the insulating cells resistant.”

Neuralink is working on solving important brain and spine problems with a seamlessly implanted device. In order to do this, they’re working on surgically implanting electrodes right near various neuron clusters.

This will allow them to read the electric signals and then correlate them to various thoughts or movements.

They’re also working on sending information back into the brain. And since Neuralink is working on an electrical implant it’s unfortunately unlikely that they’ll be able to address MS.

Some of the problems they’re looking to address however include memory loss, hearing loss, blindness, paralysis, depression, addiction, and strokes.

In an interview with Joe Rogan from last year, Elon even went on to elaborate on how Neuralink could help paralyzed patients.

“It could in principle fix almost anything that is wrong with the brain and it could restore brain functionality. So if you’ve got interface into the motor cortex and then an implant that says that’s like a microcontroller near muscle groups, you could then create a sort of a neural shunt that restores somebody who is a quadriplegic to full functionality like they can walk around be normal“

Elon has emphasized some of these goals are years away but the team is working hard to make progress. And I hope you can tell why I’m extremely excited about the future of Neuralink.

Elon tweeted a response to a quick animation tweeted by Vala Afshar.

The animation shows a variety of older tools spread across a desk. They include a landline telephone, a newspaper, a polaroid camera, and something that looks like it’s a fax machine but who knows.

The animation shows all these desk items consolidating into one small device. It seems to imply that the functionality of our computers could eventually fit into our sunglasses. And elon responds to this tweet animation by saying “Even smaller to a Neuralink chip“.

It’s very cool to see how simple things like the Old Paper Wall Calendar are now so integrated into our computers. Likewise, it’s no longer necessary to have a physical globe because google maps can give us most of the useful information we need on a daily basis.

All these technological advances seem to have happened simultaneously. But when looking back on the past 20 to 30 years it feels like it happened so quickly and at the same time, the progress felt slow while living through it.

And I personally believe that this is how we’ll feel about Neuralink and other brain-machine interface companies as well.

So stated a little differently Neuralink and other companies are working to make the progress as quick as they can. Yet for those who are keeping track of that progress. it’s not very easy to remain patient.

Another takeaway from this animation is that Newer Tech does not always mean Better Tech. For example, the polaroid camera has been staging a mini-comeback. Some people like being able to immediately access a physical copy of a picture and others are just part of the retro trend.

Similarly, I know many people who still keep a physical paper wall calendar despite knowing the advantages of having the digital calendar sync to our phones. In the future, there could be a hybrid physical-digital wall calendar that synchronizes with our phones.

Although it’s a different type of technological advancement, the same type of thing is probably going to occur in the brain-machine interface space. And it’s up to the companies to determine which products and services will provide the most usefulness for society at that given time.

New startups and established companies like Google, Apple, Amazon, Snap, Microsoft, and Facebook have explored augmented and virtual reality projects. So the next logical step for them is to commit to brain-machine interfaces.

Also, keep in mind I’ve only listed major companies in the united states, there are tech giants around the world that will also probably play in this space in the future.

Facebook has already started working on various devices that you can wear on your eyes, hands, or head. In an article recently published by the tech at Facebook, the team discusses the road ahead writing “We want to continue supporting the exploration of head-mounted optical BCI technologies that our external collaborators are developing, even as we focus on wrist-based input devices for AR and VR internally at Facebook reality labs.”

They also share that they’ve developed “A wearable prototype that uses near-infrared light to measure blood oxygenation in the brain from outside the body and indirectly measure brain activity in a safe non-invasive way.”

And does that sound familiar it’s the non-invasive approach that Kernel is also taking with their headset product flow. Stay tuned for our company spotlight episode highlighting the work that Kernel is doing it’s quite interesting to follow their progress.

And colonel founder Brian Johnson and Elon talked about how elon was potentially joining Kernel before he started Neuralink.

So going back to Facebook, this article was written to highlight a research collaboration between the University of California at San Francisco and Facebook. The main point of the article is to highlight that they can now help someone with severe speech loss type out, what they wanted to say almost instantly simply by attempting to speak.

In other words, the University of California San Francisco has restored a person’s ability to communicate by decoding brain signals sent from the motor cortex to the vocal tract. Facebook is going to use this research for the development of non-invasive products.

They even specifically say in the article “to be clear Facebook has no interest in developing products that require implanted electrodes“.

Facebook is not the only tech giant exploring this I predict companies like Google and Apple have realized the writing on the wall and are going to start investing more heavily in the space.

Someone who seems to agree with the founder and former president of Neuralink Max Hodak. In a recent tweet, max Said “there are probably only a handful of phone generations left eventually it’ll be all wearables and implantables“.

And technology YouTuber Sham Seffer replied with the question “You don’t think apple will be making iPhones in 10 years and Max followed with. I mean they still make iPhones so who knows, but it will at least no longer be their flagship product unless they somehow miss the category shift and get surpassed by someone else“.

Moving on to other news, back in May, Max announced that he was no longer at Neuralink, his departure left me with questions and when I asked him to give a hint about what he’s up to he responded with don’t worry I’m up to stuff smiley face and right after he followed with science.

It turns out his response was literal in one of his latest tweets. Max said that he and a few friends started a new company called Science Corporation. In his writings on his personal website, Max explains some of the differences between science and engineering.

He says the scope of what they’re working on at science is smaller than building a BCI. He also says “we believe we have a clear view through to a first big defining product built on an overlooked technical approach that hopefully, we can deliver to patients in a timely manner“.

Then the statement that you’re probably most interested in is Max’s comments about his departure from Neuralink. He says

“As for Neuralink, I was being genuine when I said that I learned a ton there and remained significantly invested in their success. The truth is that it wasn’t my choice to leave and there was a lot left there. I still wanted to do it.

But as usual, Elon was right it was time for me to go the background is complex. And in some sense doesn’t really matter in what should be a surprise to no one, elon is by far the most effective operator I’ve ever met, and the four years I had there were in retrospect the best education on how to turn difficult technical problems into businesses.

Going forward though we both work with the brain, our goals are different. Science is not working on products that will likely be very useful for merging with AI though that is a mission in which I hope Neuralink is successful.

Although we may not find out the full story I predict that there will be continued success for both Max and Elon.

At the beginning of this year, elon stated “Spacex is building a futuristic bar at the top of the high bay with 360-degree windows and a glass 4 looking down on the rocket factory“.

He then followed it up by saying that in order to get to the bar, one has to quote catapult high into the air and land on the roof with a base jumping parachute. Unfortunately, Neuralink doesn’t have as grand of a bar but Elon did, tweet out this dizzying look of a cool spot for employees to grab some drinks.

He also followed it up by saying that it’s inspired by cyberpunk.

And lastly, I’ve been thinking about adding some simple trend tracking at the end of the update episodes. So we’ll try it this time and see how it goes, this time the Neuralink employee count is particularly interesting because there’s been a downtick over the past month.

On August 5th, LinkedIn showed that there was 187 employees and at the time of this working on this article on September 8th there are 182 employees. I suspect that this is due to the typical Elon company protocol of making sure that every employee is performing excellently.

It’s no wonder that Tesla and SpaceX have had remarkable success they have incredibly talented and passionate team members. And Neuralink hiring efforts however have not slowed they currently have 65 Neuralink Jobs opening on the company website.

Some of the roles appear to be duplicate postings so, around 50 of the jobs in Neuralink Company are in Fremont California the same city as the Tesla Factory. And around 10 of the jobs are in Austin Texas where you might have guessed is the closest big city to the Texas Terra Factory.

The company’s also been gaining a substantial following on LinkedIn and Twitter as you can tell there is quite a substantial bump up following the April 8th release of the Monkey Mine Punk Demonstration.

Thanks for reading till the end. Comment what’s your opinion about this information “Elon Musk’s Neuralink Update – September 2021”.