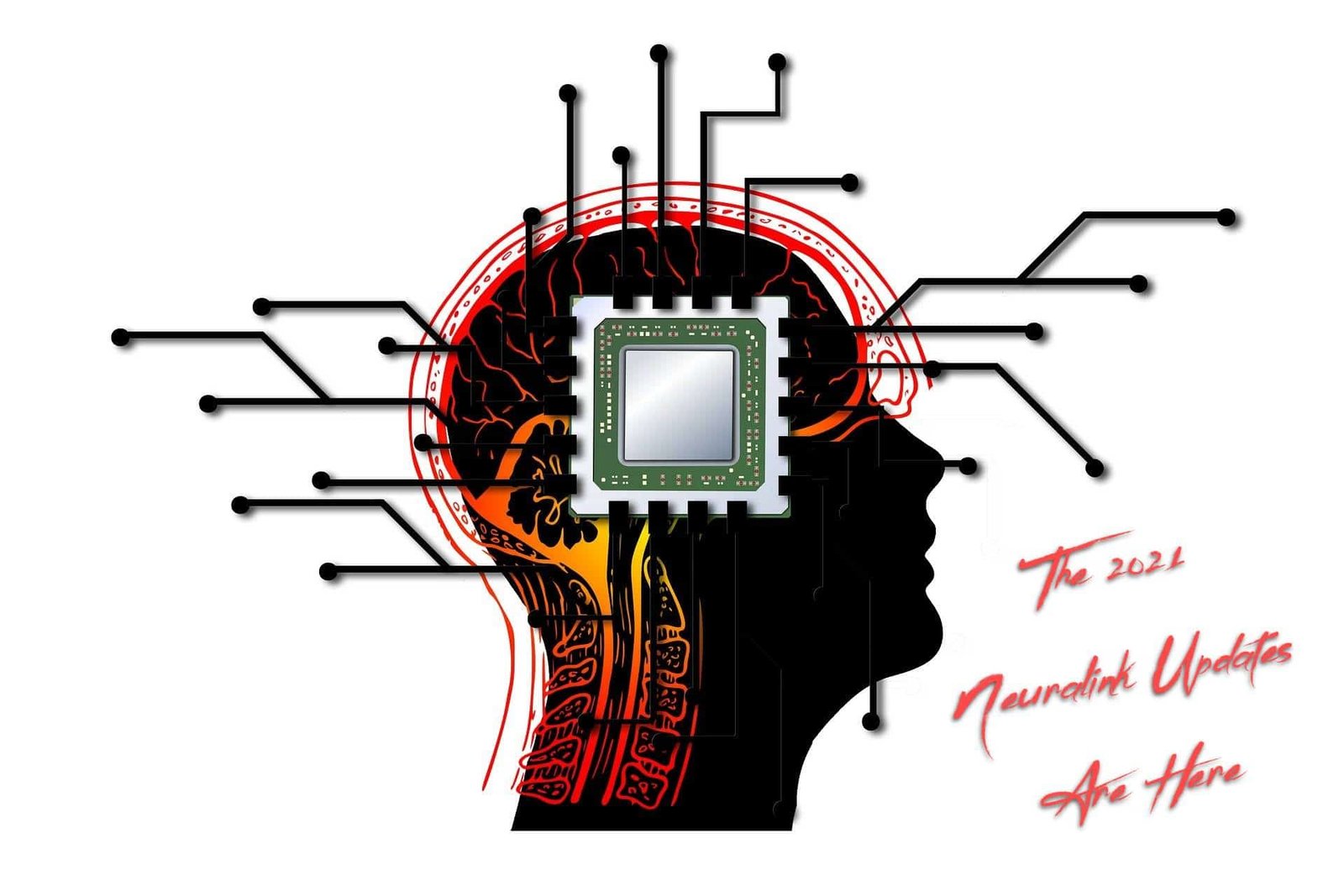 The 2021 Neuralink Update: Alright, guys, This is 2021, and Elon Musk already put cyber implants in monkey brains. Apologies to anyone who is expecting this past to be a more normal year as we are only getting weirder from here.

It may be the first step towards a technological renaissance that pushes humanity into a golden age or it is literally the rise of the Planet of the Apes, it is still early days and could go either way.

You probably already know that Neuralink is a company that was founded by eccentric billionaire and meme Lord Elon Musk. And there they make digital implants that are currently going into the skulls of various animal test subjects.

The implant allows a direct wireless interface between the animal’s brain and the computer. Elon calls it Fitbit in Your Skull and eventually the Neuralink will be moving to a human, possibly this year as well.

We know this is a project that Elon has been working on for some time. The company was founded in 2016 by Musk and a group of eight partners who specialize in areas such as neurosurgery, electrical engineering, and neurotechnology.

For years, all we really knew about this company was that they were working on some sort of computer chip implant for the brain that could range from curing neurological diseases like Parkinson’s or to allowing people to interface with computers and AI technology. He could do everything till he gave.

And it wasn’t until last year that we really started getting a steady stream of information coming from Neuralink and seeing what they were actually doing. And in 2021 the flow of new updates is going stronger than ever, with Elon sending out tweets to recruit new employees to Neuralink and talking candidly about its Cyber ​​Monkey feature in Clubhouse interviews.

It’s as good a time as any to catch up on all that stuff because this is a company we’re going to hear a lot about in the months to come.

Elon’s most revealing Neuralink conversation to date came in early February on The Good Times Show, a technology podcast on the invite-only Clubhouse app. During the interview, Elon revealed some new information about these brain implants and where they’re going with the technology that, of course, is Cyber ​​Monkey.

Elon told the GoodTimes to show that he has a Neuralink Implanted Monkey that can play video games with his brain, no controller is needed. The monkey plays pong with brain waves alone.

He hasn’t been mutilated in any way, they just had to give him a weird haircut, apparently, a USDA inspector came over to investigate the situation and said it was the coolest monkey feature. He had never seen in his entire career.

At least we’ll have to take him at his word for now because no one has taken a look at the latest NeuraLink test except that monkey watcher, according to Elon.

The last time we saw it was in the summer of 2020 when Neuralink pulled out a small herd of pigs that had received transplants.

It was a very simple demonstration. Basically, the Neurolink was receiving nerve signals from the pig’s nose and every time the snout touched something the neural link would send a signal to a computer which in turn made a kind of beeping noise. And used to chart the activity on a graph.

It was a neat demo, but nothing really breathtaking to see, obviously the two monkeys playing pong with their minds are going to be a real showstopper, but the pig demo fails to prove it.

Important was that the Neuralink could be safely implanted and removed without being killed or crippled Animal. That is clearly something they have to tame down before they can even consider human testing.

The transplant procedure is not super invasive, but it requires a hole in the skull and tiny wires attached to the brain. Luckily the installation method is almost as genius as the product itself.

Elon based the idea of ​​Neuralink’s physical connection on the science fiction concept of Neural Lace, which comes from a series of books he loved. The idea was originally for a digital layer that could sit on top of the brain and would not require extensive surgery to insert.

Neuralink achieved that concept by using a robot-like sewing machine to install the implant. After drilling a hole in the skull so that the implant is flush with the subject’s head. The robot will stitch a series of small flexible probes into the subject’s brain.

Each probe has 48 to 96 wires and each wire has 32 electrodes. The machine is capable of inserting up to six probes per minute.

The speed with which all this happens and the flexible thread-like nature of the probe make it all possible. In previous experiments where rigid probes were inserted into the brain, the body would immediately recognize them as unknown material and generate tissue to take them out.

Neuralink has found that when the flexible probe is rapidly inserted. It actually reduces the trauma to the brain that can trigger a bounce-back response. Now that’s a lot of science, I know don’t worry it’s as deep as we are getting into nerdy stuff like this article if you’re still following me.

Hopefully, I got that mostly right but basically, it’s the robots that make Neuralink Secure. It’s a fully automated process that takes human error out of the equation. Elon has also said that safety is his first priority in all of this and that is the approach he takes with his Tesla vehicles.

In a Neuralink presentation with Pigs, Elon talked about how it’s technically legal to ship a vehicle with a one-star safety rating with Cars. But Tesla only likes to make cars that are five stars in every category.

The same standards will apply to Neuralink, working with the FDA to ensure they not only meet the guidelines for safety but exceed all requirements.

Now that we know how a Neuralink works we can go back to what a Neurolink can actually do and it’s a concept that evolves every time Elon speaks about it.

What can Neuralink actually do in the future?

Initially, the use of brain-machine interfaces in the short term was to treat serious brain diseases with the ultimate goal of human enhancement sometimes referred to as Transhumanism.

Elon himself once described Neuralink’s project as helping to achieve symbiosis with artificial intelligence. We know that treating neurological disease and injury is still top of mind for NeuraLink. And we know it could move towards clinical trials starting later this year.

We learned this from a Twitter exchange that Elon had with a man who had been paralyzed below the shoulder due to a car accident and was looking forward to participating in the study with Neuralink. In his Clubhouse interview, Elon gives us an idea of ​​what Neuralink can really do for a person in a situation like this.

In the short term, the Neuralink implant won’t be able to give him back control of his body, but it could help a person make up for his lost potential by enabling him to control an electronic device with his mind.

Anyone with Neuralink thinking of simply eliminating the keyboard mouse and touch screen from the equation will be able to interface with a smartphone.

Elon says people are already into cyborgs because they have a tertiary digital layer for phones, computers, and applications. Elon said that with a direct neural interface we can improve the bandwidth between your cortex and your digital tertiary layer by several orders of magnitude.

The speed at which people can interact with technology has increased by 1 000 to 10 000 times faster, and in the long term, this connection may extend from your smartphone so that you can connect directly to other people’s minds.

Now, this is where Neuralink gets really weird. In theory, two people with a neural link could communicate ideas telepathically, and this would be a quick transfer of information so that your brain wouldn’t have to waste time compressing an idea into words. You don’t have to break your words in your brain as a thought.

The idea would just transfer instantly like airdropping a photo from your phone to your laptop except brain to brain. When you apply that concept to human learning it means that we can transfer information directly into your memory. You won’t need to read a book or watch a YouTube video. Everything will be in your mind. Visuals in the matrix where the Neo learns kung fu in just 30 seconds, basically it is but in real life.

In the same interview,  Elon Musk said that the neural link could hold as a saved state of a person’s mind after they have died a backup drive for your non-physical being your digital soul.

It’s nuts we could have something like that Black Mirror Episode where everyone gets uploaded to a digital afterlife server when their body dies. Elon even said that we could end up with an altered carbon level situation where your digital self could be implanted into another human body.

They could even put your Neuralink into a robot and you would become that robot. We all better get used to elon musk being around because he’s on track to become the first digital immortal.

Thanks for reading till the end. Comment what’s your opinion about this information “The 2021 Neuralink Update”.

2 thoughts on “The 2021 Neuralink Updates Are Here… Read Now”